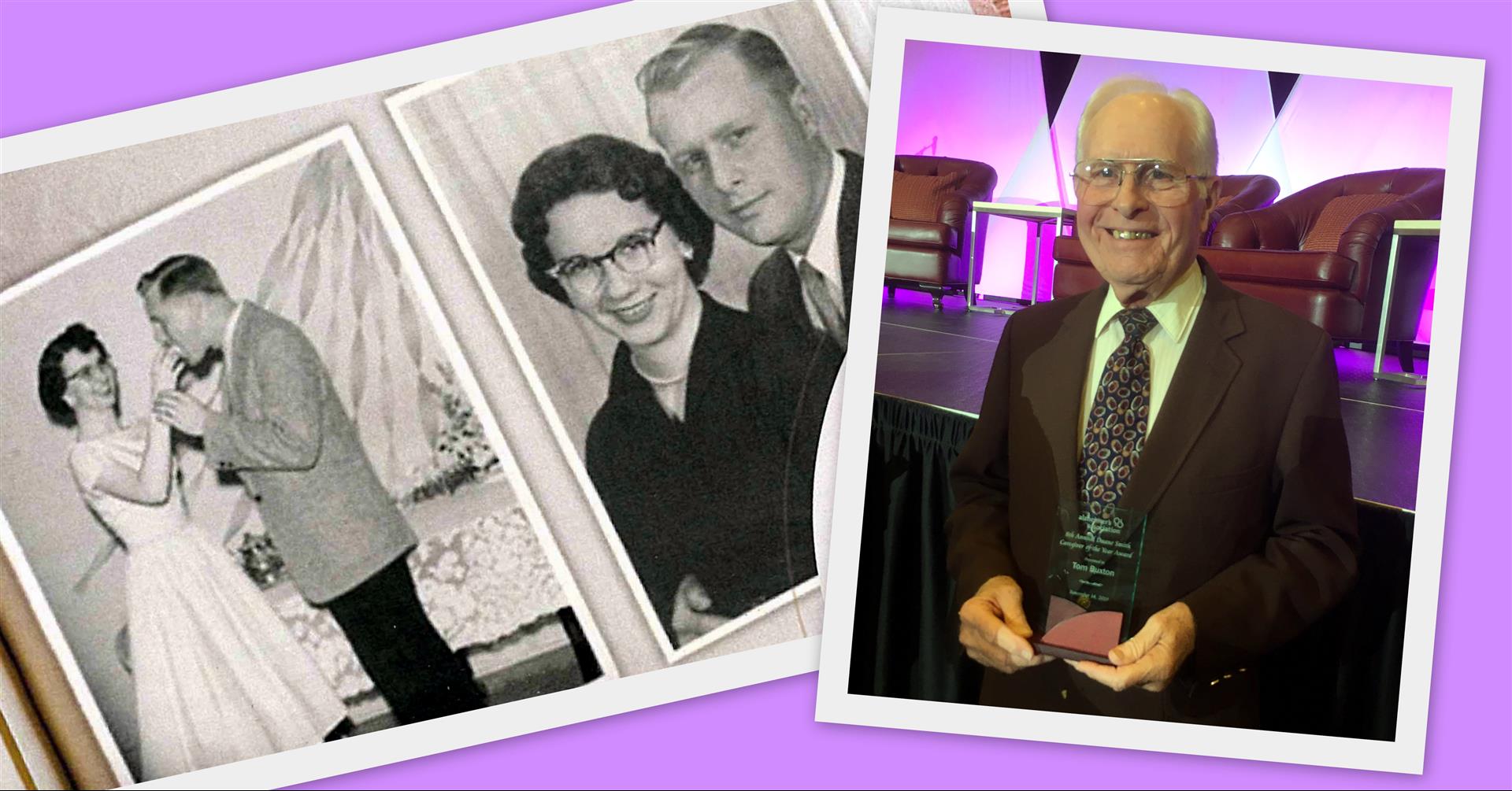 On November 14, Tom Buxton, husband of resident Shirley Buxton, received the 8th annual Duane Smith Caregiver Award from the Central and Western Kansas Chapter of the Alzheimer’s Association at its fall conference. The award recognizes caregivers who support individuals with Alzheimer’s disease and other forms of dementia.

Following is an excerpt of the nomination that our staff submitted earlier this fall.

Tom Buxton’s caregiving role began while he and his wife Shirley lived and owned a business together in Woodward, Okla. As business partners and best friends, they enjoyed spending much of their work and play time together. When Shirley’s dementia was diagnosed, he cared for her at home, as he had all of their years, eventually becoming a full-time caregiver. They later moved to Kansas to have the assistance of their children and the memory care team at Newton Presbyterian Manor.

While they were still at home, Tom said there were several months that his wife would often wake up in the middle of the night terrified, insisting that her mother had been in an accident and they needed to go find her. Night after night, Tom would get up and get dressed to take Shirley to the ER entrance of their small town hospital. They would walk in the door, greet the staff and walk every hallway so that Shirley could be certain that her mother wasn’t there. Once satisfied that her mom was ok, she would relax and they could head home to sleep. The staff of the ER grew to expect them nearly every night.

Though not specifically trained in Alzheimer’s care at the time, Tom instinctively knew that Shirley’s feelings needed to be validated and that he had to enter her world to help her make sense of what she perceived around her. He often tells us that some days he’s here as her dad, some days her husband and some days a stranger. He takes on the role that helps her feel at home and safe, sacrificially giving up his desire for his wife to know him for who he really is.

When a new Memory Care promotion was created for Newton Presbyterian Manor, Tom was quick to share his praise and comments about living as a caregiver for someone with this disease. Their wedding photos and some of his quotes appeared in the piece which has been circulated widely. Tom says, “Before we were married 59 years ago, I promised Shirley’s dad I would take care of her and keep her safe. When I realized keeping her at home with me was not keeping my promise, we moved to Presbyterian Manor. It’s the right place for us. I know that.”

It’s that dedication to his wife and her best interests that have endeared him to our staff, neighbors and family members. In fact, it was a fellow family member of someone who visits for day services only who has observed Tom and suggested we make this nomination.

“From the encounters and interactions that I have had, I can say that Tom is very patient and compassionate with Shirley even on her more difficult days. He is always positive and enthusiastic in his tone. If you have a conversation with them or notice his conversations as he is pushing her around the Manor, Tom will always include her in every conversation even though she cannot always respond. Tom is very considerate of her feelings, and it is amazing to watch him interact with Shirley. I think one of the most important parts of being a caregiver is to always treat your loved ones with dignity and respect, as they cannot control the progression of this disease, and Tom does that in all of the ways I mentioned.”

“Tom is here to see Shirley every day for several hours. He helps her at lunch, takes her to the patio or on walks and just spends quality time with her. He is extraordinarily attentive, with an eye for what she needs. For example, he noticed that Shirley was watching me closely one day and he knew that she may be associating me with someone they knew in the past. He brought Shirley to me and talked with me as if Shirley knew me and may be able to connect those dots. It was a special conversation.”

“When I meet Tom in the hall or at the coffee bar and ask how he is, he will tell me, ‘Well, Noelle, I don’t quite know. I haven’t been to see my dear wife just yet.’ His life centers on the tender loving care he can share with her daily. When he pushes her in the wheelchair for a long walk through the building, he pushes with one hand so that he can walk beside her, which is no small feat. I asked if he needed some help, but no, he said. He just wants to be where he can see her lovely face.

“Oh, and his peanut butter cream pie is a hit every time he brings it in, which is often as it is Shirley’s favorite. She discovered the recipe on a card in their Oklahoma gas bill years ago and when she no longer was able to follow the recipe, Tom took over, and he’s been making it for years. ‘Shirley loves her sweets,’ Tom says. When I visited with them today, they were having lunch and all the while, she had a cinnamon roll clutched in her left hand. Tom says that he and Shirley traveled often for their business and they were always on the hunt for the best cinnamon roll in northwest Oklahoma. The bigger and sweeter the better! He still brings cinnamon rolls to his love.”

Tom and Shirley Buxton have been blessed with a strong marriage and a loving friendship for over 60 years now. Tom continues to provide the love and companionship that his wife needs and that our Newton Presbyterian Manor team has been inspired by for the last four years. It is a privilege to share this nomination for the Duane Smith Caregiver Award.

Fold in Cool Whip (fold – do not stir). Spoon into pie shell. Sprinkle chocolate or butterscotch chips on top as desired.

Put immediately in freezer; thaw a few minutes before serving.