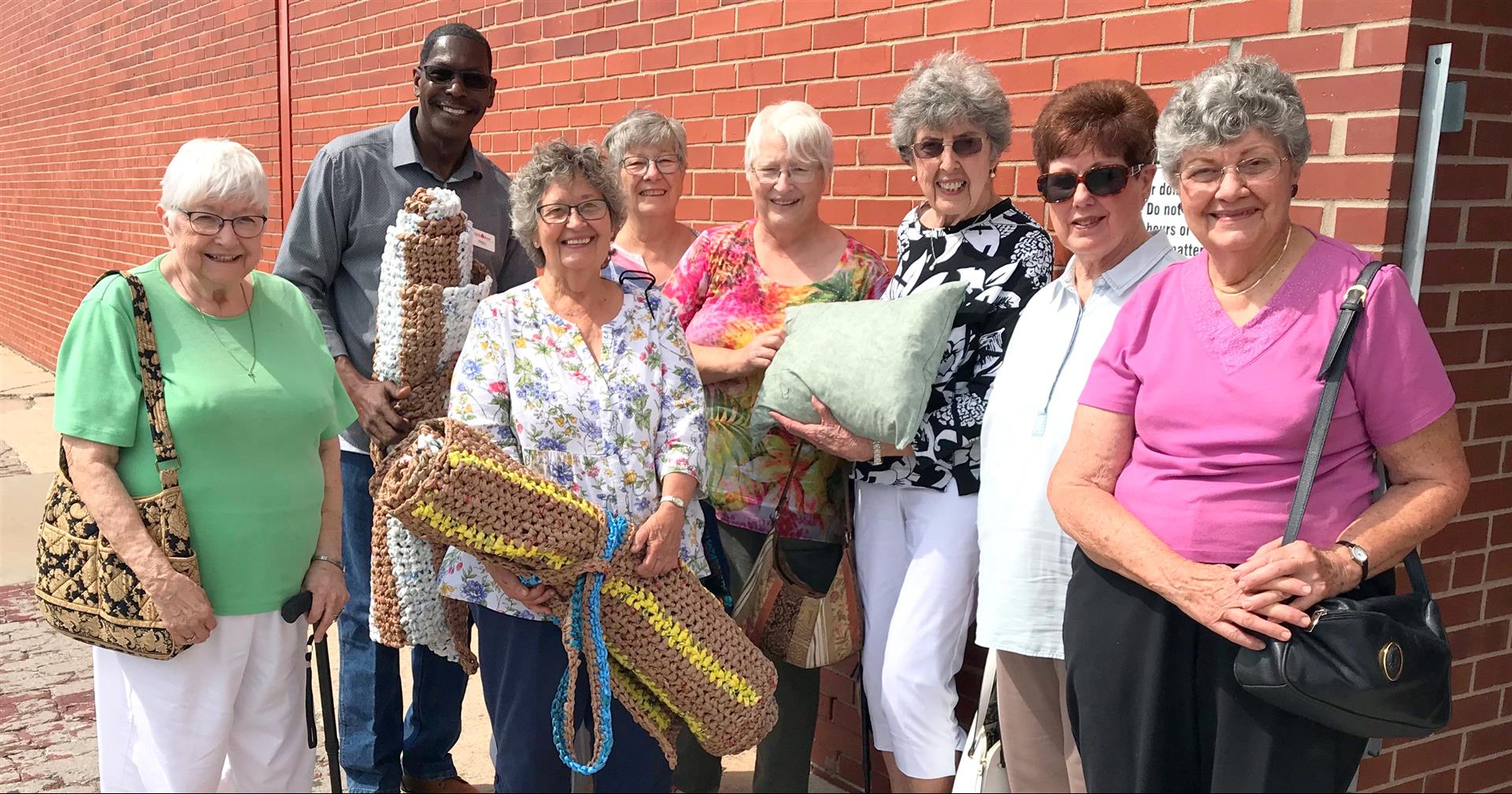 When June Thomsen heard about a group of women in Chicago who were crocheting plastic bags into sleeping mats for the homeless, she thought the idea was brilliant. However, it wasn’t until she moved into the Presbyterian Manor community last fall that she discovered a way in which she and others could help the cause.

“It all started with a conversation I was having with a friend here at Presbyterian Manor,” said June. “We both had extra plastic bags and thought it would be fun to invite others to join us to cut them up to make plarn (plastic yarn).”

Now, nearly a year later, up to eight women meet every Thursday between 9:30 and 11 a.m. in the community library to cut plastic bags into loops which are then joined together and wound into balls of plarn.

Once completed, the balls are then handed over to a group of women at a Baptist church in Wichita who crochet the material into mats. An employee of the Salvation Army in Newton has also joined the group and is crocheting a sleeping mat.

When asked what she enjoys most about the group, June has a difficult time settling on just one.

“I really enjoy this group for several reasons,” said June. “One is that the task is easy enough for people of all ability levels to participate. Another is that the end product, a sleeping mat, will make a homeless person's life a bit easier. And lastly, we are taking lots of plastic bags out of circulation and out of landfills, waterways and oceans. It takes between 500-600 plastic bags to make one sleeping mat.”

But the women’s involvement in the group isn’t purely altruistic, there is a social aspect to the weekly meetings as well.

“Oh yes, we also chat a lot and drink some coffee,” said June. “The fellowship is just plain fun!”

And it’s that fellowship component that excites community staff members.

“I love that this was started by a neighbor who has only lived here since November, and it’s bringing together old and new neighbors in a relaxed and comfortable way,” said Noelle Dickinson, marketing director.

Participation in the group is purely on a come and go basis and varies from one week to the next. If you are interested in attending, you are welcome to stop by whenever you’re available.

The Plastic Bag Ladies appreciate everyone's involvement through donating plastic grocery bags in the box in the gardening room at the end of the Garden Apartments hallway. Your bags keep them in business!

In the middle photo, from July, are Heidi Thomsen, JoAnn Johnson and Betty Harder who have mastered the art of making plarn balls and visiting at the same time.

At the bottom, JoAnn Johnson, June Thomsen, Sharon Koehn, Carolyn Adams and Reitha Klaassen cut plastic strips to which will be tied together to make plarn. This photo was taken in May.